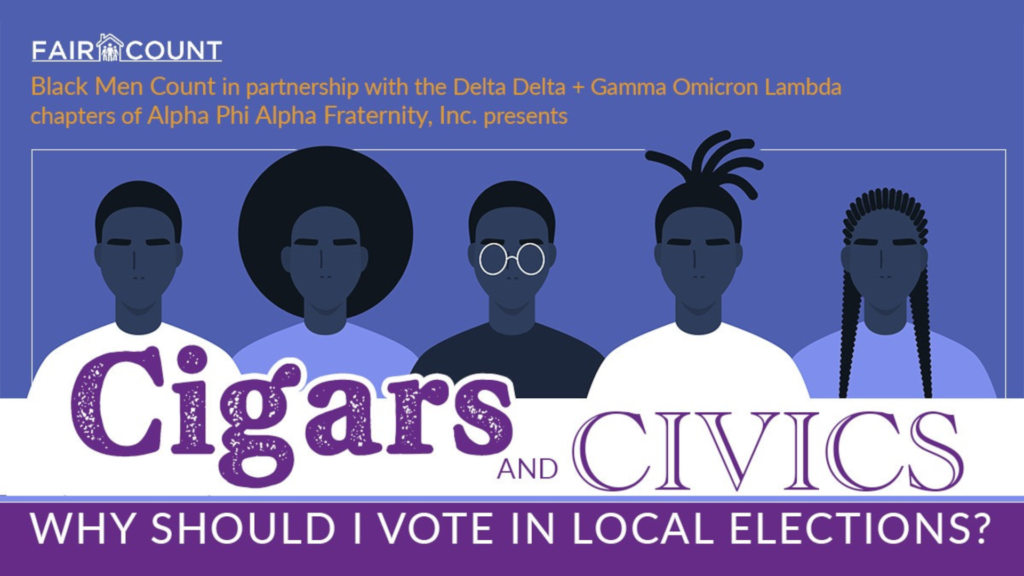 Black Men Count, in partnership with the Delta Delta and Gamma Omicron Lambda chapters of Alpha Phi Alpha Fraternity, Inc., will host a four-part virtual series, Cigars & Civics, to discuss the power of Black men, their vote, their voice, and the consequences communities can face when Black men do not vote.

The first virtual discussion, billed Cigars & Civics: Why Should I Vote in Local Elections?, is scheduled from 6-7 p.m. on Feb. 22 and will be hosted by Fair Count’s Campaign and Organizing Coordinator Reggie Abraham. The event will feature three panelists, and conversation will center on the importance of voting in often-overlooked local elections, highlighting the impact those contests have on the everyday lives of Black men, their families, and their communities.

“There’s this negative stigma attached to Black men when it comes to voting, and Black Men Count wants to help change that narrative with events that get everyone talking,” Abraham said. “Just as a financial inheritance can help build the generational wealth of a family, providing Black men with information and resources that empower communities can help grow a civic inheritance that Black men can pass to future generations.

Founded in 2019 and anchored in Georgia, Fair Count is a nonpartisan, nonprofit organization that works to build long-term power in communities that have been historically undercounted in the decennial census, underrepresented at the polls, and whose communities are often torn apart in redistricting. FairCount.org